A Story of Grit in a Flash Flood –

I did not get a degree or even take a course about what to do, if there were ever a sudden surge of water to come my way. After all, why, this is never going to happen to me!? Until it one day did, and in a way, you could not make up in a thriller life and death movie.

On September 1st, 2018, my partner and I were out in a remote area referred to as the Aravaipa Canyon Wilderness Nature Preserve, about 2 hours northeast of Tucson, also known for its beautiful and rugged 50-mile-long docile creek. That early afternoon, we set up camp approximately two miles up creek from the trailhead, and later that day after settling in, hiked further up to take in the gorgeous scenery and catch up with our friends that had left an hour before us.

The rest of the quick summation to what took place, I wrote right after we got back on my Face Book Page and is re-quoted below:

Posted on FB, September 4th, 2018—”Words can not describe this experience, however, I believe it is worth noting so I will do my best.” 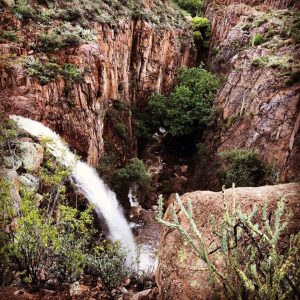 Where you see us taking video that Saturday evening of the river was nothing compared to later that night, where we had at least 3 times the flow of water six to eight hours later. The water must have come up another 30-40 feet and was the most raging turbulent, and muddy water I’ve ever seen (and I am from the Northwest). All the trees you see in this video were completely wiped out by morning. The noise of splitting trees throughout the night along with the almost deafening roar of the raging water and thunder, was beyond belief!  The pounding rains, thunder and lightning in the narrow canyon could’ve woken up the dead and probably did, the way it echoed off the steep cliffs…it truly was surreal!

However, the most amazing thing by far was the woman by my side, Marie. In the face of truly imminent death, she was calm, loving, exemplified her tremendous faith; and was reassuring that everything would be alright, no matter the outcome. I had a calm demeanor but inside, my gut was raging like the river right by my feet. Meanwhile, she was bitten by a scorpion and had numerous ant bites all over her body that she endured along with allot of bruises from scaling the cliff, but not once did she complain. (What Scottsdale woman does this? Just kidding) I have known her for two years now and knew she was an anomaly of amazing character; however, you really don’t get to truly know what someone is made up of until you get into a situation like this. She has the soul of an angel along with steel grit!

To quickly finish the story, we did not jump to the tree that appeared to be our only hope and that disappeared that evening, which would have been our fate as well. Instead by the grace of God, I took a chance and was able to scale a steep mountain wall to a rim that was right above us, and miraculously made it. Marie being a ‘preparedness-thinking’ grabbed a poncho before we left for our hike—at the time of the grab, it was mostly sunny and calm. After I got up onto the ledge above, I looked down and the river was starting to sweep Marie away from the spot we had been on for a good 6-7 hours earlier that day. If it had not been for turning the poncho into a rope, there was no way I could have gotten her up to the next level. Fortunately, I got her up and from there and we brailed our way up another 30-40 feet, as the water literally chased us up the very steep, nearly impossible canyon. Through the stormy night, we had to climb enough to where we were out of harm’s way for the night.  The power of the mind in not knowing what you are having to scale due to darkness in a life-or-death situation, is truly remarkable! That morning, when the darkness had lifted, the once awe-striking landscape, was totally destroyed with massive trees floating down past us. At approximately 6:10 am, we were able to climb a few more feet out of the canyon and go look for our friends, which we feared maybe were dead. We found them alive with Mike, one of my longtime college buddy, a little beat up with a scorpion bite of his own, and a big gash on his head from a rock that fell down on him that later required 35+ stitches. Finally, we want to thank all the kindness and love displayed by our rescuers, our friends, including some new ones that were a part of this enlightening-(haha) experience. The hospitality from some of the locals after we were helicoptered to safety, still brings great emotion to us, and a couple of them are still friends to this day.

PS-to Denise and Mike…you guys are amazing friends and one other tidbit that I left out.. Mike drove us home with a major gash on his head from a falling rock earlier that night, and scorpion bite on his hand. I think the guy is partly made from a little canyon rock himself.”

The 60-year waterflow charts for the area, revealed to us that this kind of flooding was a one in a million-chance, due to taking place approximately every 15-20 years per the historical creek flows.